So, it's the week after Manchester Pride. I was still a tad fragile. Shaky. Sweaty. Not feeling 100%. What would Producer Jamie line up for my weekly challenge? Something lovely? Fluffy? Spa relaxation? Bubble bath with a glass of rose perhaps? Knitting with Betty from the Gorton over 50s club?! Hell no. My weekly challenge this week was to experience the velodrome. Speed cycling at the National Cycling Centre in Manchester.
Now - I'm an OK cyclist. I enjoy an occasional jaunt through the French countryside - baguette in one hand, running singing Nuns following me. But cycling on a track?! Not just any old track - but the track that where the British Cycling team train? Now that's a whole other ball game.
I was shaking (mostly due to Pride), I changed into my cycling gear (the good old running shirt and baggy shorts made another appearance) and picked up my racing bike. It was lightweight, but hang on... WHERE were the breaks?! There were none. Oh dear.
I was taking part in a taster session - a chance for beginners to have a go, and for the more experienced rider to hone their skills. We started. Our trainer (who was lovely) - explained how to ride the bike - no breaks and you had to keep peddling at ALL times. It sounded daunting. I pushed myself off from the barrier that was the only thing keeping me upright .... and promptly crashed the bike straight back into the barrier. NOT a good start. But eventually I got the hang of it. Speed is the key. You have to go VERY fast otherwise the bike (and you) crash to the ground. I managed it - just. But after half an hour later and I was exhausted and more than a little shaky. Even with this - I did love it. It's a real adrenaline rush when you're whizzing round at high speed - and you get a real buzz from knowing that you're using the same track that our Olympic athletes train on.
I'd definitely do it again. There's even a new BMX arena. More details here... http://www.nationalcyclingcentre.com/
You'll find a suitably flattering picture below. I've always loved a helmet.
GOD KNOWS what I'm doing next week. Probably wrestling crocodiles if Jamie gets his way. Have an awesome weekend.
Cx 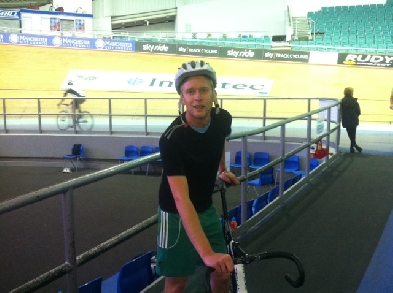