Fly to the USA from Manchester Airport

Whether you fancy a trip to visit Mickey in Florida, photograph The Whitehouse in Washington, or celebrate the 4th of July in Philadelphia, you can fly direct from Manchester Airport to more North American destinations than ever before. And if there isn't a direct route, its as easy as pie to catch a onward flight to anywhere you fancy. We've checked out three of the most popular gay destinations in the States for you - and just click the plane to book right now! 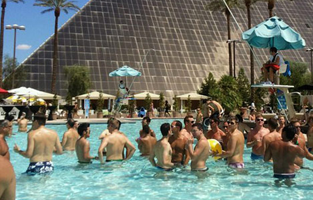 A flashy, glitzy, decadent mirage in the middle of the desert, Las Vegas is one of the most popular tourist destinations in America. Whether you’re here to catch a show, gamble or just relax by the pool at one of the various world-class hotels this town has to offer, ‘Sin City’ is the perfect LGBT getaway.  With a number of gay clubs on the Strip and in the Fruit Loop (the ‘gayborhood’), you’ll have a great time, no matter what time of the year you visit.
If you who like it hot then Las Vegas is certainly the city for you.  On average, there is 300 days of sun and only about a months worth of rainfall each year. In the summer months expect temperatures of 40c plus. In the weather will dip to around 15c. Make sure to check out one of the infamous gay pool parties to cool down!
There are taxis everywhere you turn in Vegas, darting about all over the city. There are also bus services which serve Las Vegas, Henderson, North Las Vegas and other suburban areas. This can be one crazy city so taking advantage of public transportation is an incredible way to stay safe and have a worry-free time. Of course Vegas isn’t Vegas without checking out the odd casino or two. Just remember, what happens in Vegas...
For more information visit www.qvegas.com or www.visitlasvegas.com/how-to-vegas/gay-vegas/ 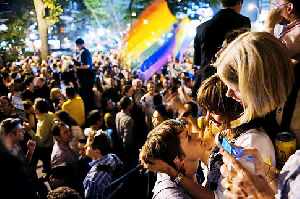 The Big Apple is the frenetic home to countless millions of people, zooming about with purpose. NYC is often considered the birthplace of the gay rights movement in the wake of the Stonewall riots. For some, it’s intimidating; for others, the pace is exhilarating. This emotional overwhelmingness is a cornerstone of the Manhattan experience, so embrace it and have some fun: This is the self-proclaimed centre of it all, the biggest city in the country (by a factor of three)!  Things happen in New York City, and you are just along for the ride.
And what a ride it will be!  There is no shortage of things to do in this epic metropolis; boredom is simply not on the menu. Take in a show on Broadway; explore the hipster enclaves around Brooklyn; get lost in the cavernous Museum of Metropolitan Art and find yourself exploring the most gay-friendly neighbourhoods - the West Village,  Chelsea and Hell's Kitchen  from dusk until the early morning.
The five boroughs – Queens, the Bronx, Manhattan, Brooklyn, and Staten Island – each have their own personalities, attractions and feel. The network of transport can speed you to each of these, or choose to stay in one of the boroughs outside the bustle of Manhattan.
One note of caution – the summers can be brutally humid in the city, and the winters can be harsh. Wintertime enchantment hits its peak in December just before Christmas hits in full swing, and the shoulder seasons of spring and autumn are by far the best times to see the Big Apple – less crowds and more gorgeous weather is a winning combination. Of course during these less busy periods you'll be able to bag a bargain on your flights and accommodation.
For more information visit www.timeout.com/newyork/gay-lesbian or www.nycgo.com/gay for general information or www.nycgo.com/nycido for information about getting wed in NYC 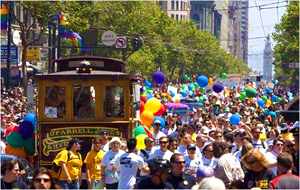 San Francisco is known as the Gay capital of America and is bursting with gay people, history, and pride. The Castro District is San Francisco’s main gay area and home to its gay community: pulsing with energy, acting as a meeting place for all things diverse, and the Castro is, "the” spot for leisure time San Francisco gay activities and events. Not to mention Castro Street Fair and the annual pride festival that happens here each July.
San Francisco's climate is mild and manageable all year round. Most days begin with fog, but it usually burns off after a few hours only to reveal warm sunshine. Winter is San Francisco's rainy season so be sure to dress appropriately! The best time to visit this Bay Area haven is the autumn because the weather is warm and the rain season hasn’t yet started.
The easiest way to get into the city is to fly directly info San Francisco International Airport. Once you are in the city, there is plenty of public transportation to get you into the city. The city is relatively small in area so it is easy to walk around, although driving is always an option. If you drive, beware that some streets can be steep and there might be limited or expensive parking, particularly in the tourist areas.
For more information visit www.sanfrancisco.travel/lgbt or www.sanfrancisco.com/gay