COMING OUT IN THE POTTERIES

What would the neighbours think?
Marcus Wemyss takes a humorous yet poignant look back at his coming out story

Nobody in Stoke-on-Trent in the 90’s was homosexual. Obviously this was not true and is a ridiculous statement. The point I’m getting at is that it wasn’t common or viewed as normal and certainly in no way accepted. Nobody in my family had ever interacted with a gay person, at all! Until London in July of 1996, they were travelling down to the Albert hall to see a concert I was performing in with the local youth choir. (That should have rang some bells really) The drop off point of the tour bus had somehow managed to be slap bang in the middle of the annual gay pride march.
As they made their way into the street my parents jaws rocketed firmly to the floor as leather clad fetish cowboys sauntered past. Everyone thought my nan and her sister (who were linking arms at the time) were old school lesbians from the 40’s and were met with clapping and cheers from the procession. Like oh my god they were lesbians together during the war, good on you girls!  Their minds quite literally blown by this spectacle, I guess that there little bubble had been well and truly burst. They talked about this experience at great length for some time, and although they could see the funny side it was not viewed as a favorable one.
Years later, I didn’t want to come out of the closet to my family. I had kept it a secret for so long, why stop now? Secrets however are very clever little things; I believe they always find a way to surface unconsciously. Sometimes you just want to get caught. Mine surfaced from my unconscious in an incredibly subtle manner; when aged 17  I decided to get wasted in a local rock club and take a guy I’d pulled there back to my parent’s house to have sex with in the attic conversion. The attic conversion isn’t a euphemism by the way; it’s just the room we did it in. Cut to the morning after the night before: Does your friend want any breakfast? My mum bellowed from downstairs. "NO NO NO” I mouthed at him desperately flailing my arms in protest. But alas he really wanted a cuppa and a good chin wag with mother dearest, I was powerless to prevent it. My bleached blonde, Goth-rocker conquest as it turned out over tea and toast, was a pagan white witch, living in a YMCA, was madder than a box of frogs and camper than gay Christmas at the Liberace residence. I just sat there nursing the world’s worst hangover; waiting for a great chasm to open up underneath the living room floor and swallow me whole, but it never came.
Spectacularly unimpressed by my "new friend” and the morning’s events my mum rang me at work. She asked me if "that lad from this morning was a gay?” Then proceeded to tell me quite explicitly that on her orders I should not be gay myself. It dawned on me that there was little chance of this whole thing just blowing over by the time I’d get home.  When I finally told my parents that evening; they reacted in a completely different way to that which I had always imagined. I had envisioned the scenario at great length playing it over and over in my mind.   My strict Christian father would throw me head first through the living room window and disown me whilst my doting mother looked on in terror and leaped to my aid. In reality my dad didn’t bat an eye lid and said it was fine. My mum on the other hand proclaimed immediately that she couldn’t bear it and wanted to throw herself under a bus. More importantly, she howled sobbing and distraught "What would the neighbours think!?”In that moment I had destroyed all her illusions of her son.  A whole imagined brood of grandchildren slaughtered before her eyes. Her perfect idea of me and my future shattered. To everyone else my sexuality was kind of obvious, a lot of people knew a long time before I even did. But parents, more often than not only see what they want to see.
Although it turned out my father wasn’t in fact 100% fine with it, my mother found it especially difficult to come to terms with. I can’t count the arguments we had, the discussions, the sleepless nights, the sheer effort it took for them to accept who I am. Truly accept it. All the while I was desperately struggling to come to terms with it myself with little support. All my family know I’m gay and have done for a long time now, if anyone does have a problem with it, they keep it to themselves. That is all I want really.  They have met boyfriends and welcomed them into their home; they are interested in my love life and vested in my happiness. My younger cousin recently came out as lesbian. My parents accepted it without question and I’m sure that given time, hers will too. I’d say were a pretty tolerant bunch. It wasn’t always that way but things can change.  That’s my coming out tale, to quote Morrissey and the Smiths: "I can smile about it now but at the time it was terrible.”  Years later I am comfortable with who I am.  If I could go back in time, I might have come out differently but I’m sure as hell glad I’ll never have to do it ever again.
Marcus is now a successfull artist living in the Potteries. Here's one he sold earlier.....

Back to Stoke pride
Back to project pride 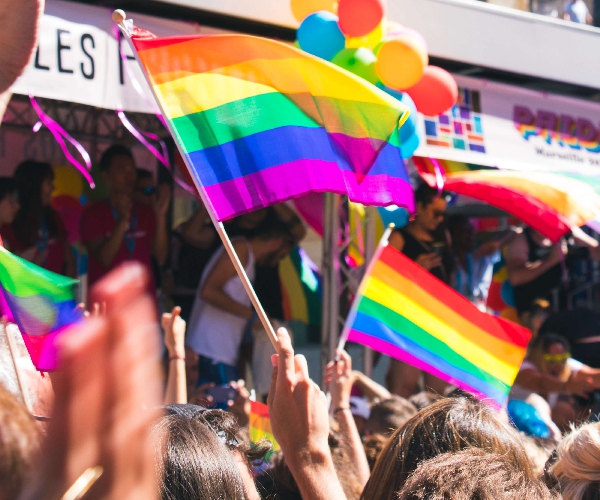